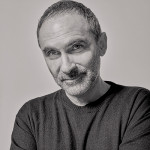 Gianluigi’s entire body of work reflects his desire to find a close interaction with his subjects, never victims nor protagonists. In his photographs, every story speaks of the mutual effort, within this photographer-subject dynamic, to describe humanity.

The turning point came when he decided to tackle something that he was always attracted to: circus professionals. Inspired by the aerial suspensions and timelessness of the work Picasso did on acrobats, he started traveling with Circus Medrano.

The intent of this experience was to seize the moment of the circus’ breathtaking transformation, from the dust of the caravan to the glow of the ring, in the daily routine of their outstanding performance.

This work, after being published in various Italian and foreign magazines, was also published by Edition Stemmle in an international edition. This edition soon became a cult book, a “must-have” for people interested the world of the circus for both passion and/or work.

From that moment, Gianluigi began to devote himself entirely to portraits – of circus professsionals, celebrities and normal people alike – seeking to recognize, emphasize, and celebrate the beauty in human differences from miniscule to massive, from heroic to mundane.

In 2014, Gianluigi created the charity project called “MASKS”. This project was born from a desire to unite two worlds: those of female icons and the circus.

“Looking at my friend David Larible’s clown makeup, I noticed that he used make-up items that belong to women: lipstick, foundation cream, mascara – to obtain a grotesque result so as to make people laugh. I also noticed that in the modern circus, the clown was always a man, reassuring and almost asexual, in contrast to the powerfully sensual nature of female acrobats and horsewomen.

So I wondered what could be, if I asked to iconic women to improperly use the tools they use every day with great seriousness to emphasize their beauty, in order to create masks for female clowns. Thus, the project “MASKS” was born. David Larible, the most important contemporary clown, designed and, when possible, personally created these masks on my icons. ”

This website uses cookies to improve your experience while you navigate through the website. Out of these, the cookies that are categorized as necessary are stored on your browser as they are essential for the working of basic functionalities of the website. We also use third-party cookies that help us analyze and understand how you use this website. These cookies will be stored in your browser only with your consent. You also have the option to opt-out of these cookies. But opting out of some of these cookies may affect your browsing experience.
Necessary Always Enabled
Necessary cookies are absolutely essential for the website to function properly. This category only includes cookies that ensures basic functionalities and security features of the website. These cookies do not store any personal information.
Non-necessary
Any cookies that may not be particularly necessary for the website to function and is used specifically to collect user personal data via analytics, ads, other embedded contents are termed as non-necessary cookies. It is mandatory to procure user consent prior to running these cookies on your website.
SAVE & ACCEPT